Written by Envoice
Updated over a week ago

It is also possible to send an invoice for an approval round before recording. This option is used when the approvers themselves add information necessary for recording an invoice and the distribution of expenses.

Whose invoice is it?

Before sending for an approval round or recording, the accountant can ascertain whose activity the invoice is linked to. For this they can send the below inquiry in the Envoice system, which is located at the bottom edge of the detailed view of the invoice.
By clicking the button “Whose invoice is it?” a view opens in which you can choose the persons who to send the inquiry to. The question will be posted in the approval view and if someone replies that this invoice is theirs i.e. they know what expenses these are, the invoice question will disappear from the approval view of the others as well.

Returning the invoice to the supplier

Returning an invoice happens via e-mail: 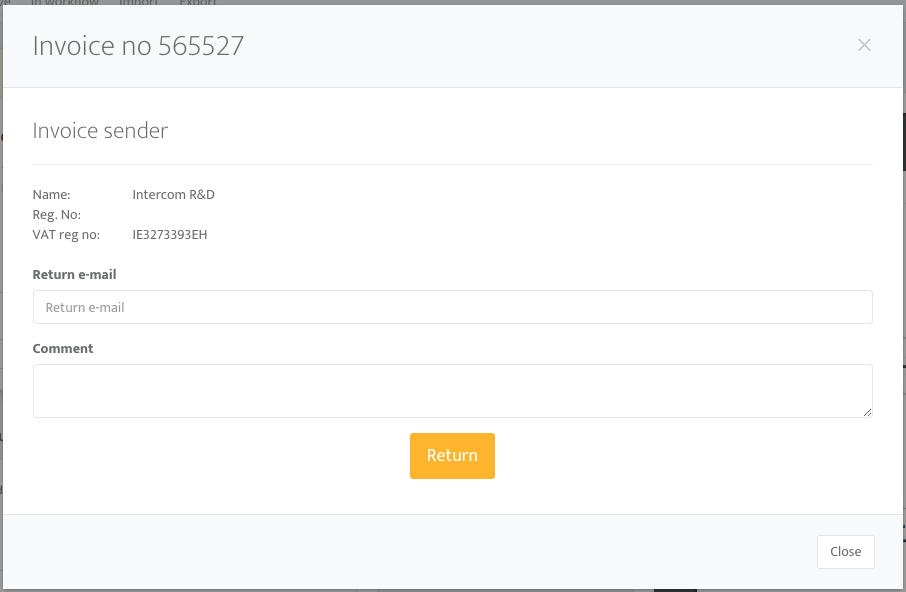 For a user that has been given the role of an approver, the documents needing their approval will appear under the menu point “Approval”. In the subdivisions “Unusual” and “Automatic”, this view also shows documents for which the user has made personal rules.

If it is selected so in the settings, the approver will receive a notification on their e-mail on each determination of an approval round and a link to the invoice that needs to be approved. Other settings also allows to choose for notifications not to be sent via e-mail. In such a case the user must use Envoice regularly and keep an eye on the approval menu point.

In the approval view, documents can be approved one by one or all at once. It is also possible to see a more detailed view of a document that requires approval by clicking on the invoice date or the name of the submitter of the invoice. The detailed view must also be used if the approver wishes, or according to the procedure applicable in the company, must do something in addition to the regular simple approval. These activities are:

In the approval view it can be seen for each document how much time is left until the payment deadline and who were the previous and are the next approvers.

Under the wheel sign at the top right corner of the view you can adjust your view settings i.e. the date by which documents are ordered in the view.

Using personal rules simplifies and speeds up approving invoices because by establishing financial limits it is possible to automatically approve invoices of a sum below a certain limit, which for example suppliers send each month. It is also possible to create a rule that if the received invoice is greater than a certain sum, it is unusual and attention must be paid to it. It is easiest to create personal rules from the detailed purchase invoice view:

At this invoice view each user can create the following personal rules for themselves:

All saved personal rules can be seen in the top right corner of the Envoice screen by clicking on your username. These rules can be changed and new ones can be added in the same place.

The approver’s possible activities in the approval round

A user with the role of an approver receives documents that need approving under the first menu point “Approval” in Envoice. According to personal rules invoices smaller than a limit established by the user may be approved automatically. Invoices may be approved as a group in the approval view without opening them, i.e. approve all invoices. It is also possible to approve invoices in the approval view one by one without opening them. It is of course also possible to open each invoice and carry out the approval actions in the invoice detailed view. 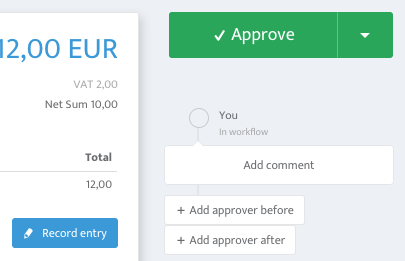 By clicking the small arrow down button on the right side of “Approve” button, the following options will open:

View for adding approval round templates:

Approval templates can be created as general or supplier-based. General templates can be used for invoices received from various suppliers in respect of a certain field or expense, for example marketing costs or vehicle fleet maintenance costs may always be approved by the same persons regardless of the supplier.

Only those persons can be selected for an approval round that have been given the role of an approver and that are displayed in the potential selection. If the necessary name is not found from this selection, the roles of this user must be reviewed under settings.

Creating a parallel approval round

Monitoring the flow of approval by the accountant

A user with the accountant role has the menu point “In Workflow”. A person that has only been given the role of accountant does not participate in approval rounds themselves but under this menu point they have an overview of how far the approval rounds have processed and also of who is the passive approver that is causing a delay.

Did this answer your question?